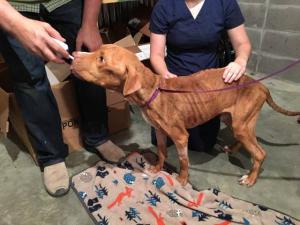 Lazaruff weighed only 19 pounds when rescued 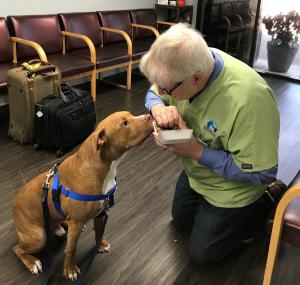 Lazaruff is the picture of health now 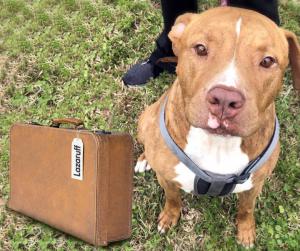 His background was tragic. An adult, orange colored, intact male, Pit, that hardly had the strength to stand. He was found in an abandoned house near Baton Rouge, LA., with no food or water.”
— text

SPOKANE, WA, UNITED STATES, April 19, 2019 /EINPresswire.com/ — His background was tragic. An adult, orange colored, intact male, Pit, that hardly had the strength to stand. He was found in an abandoned house near Baton Rouge, LA., with no food or water. He was so close to death he was covered with hundreds of flies that were already starting to consume him. The rescue team rushed him to their veterinarian who recommended putting him down. Instead, they opted to give him a chance and started an IV. This adult Pit weighed 19 pounds.

That was in August 2018. Today, the 69-lb. gentle dog named Lazaruff ( a word-play on Lazarus, the Biblical character raised from the dead ), is the picture of health and is embarking this Easter holiday with his rescuers Dr. Marty Becker and his wife, Teresa Becker, as they travel more than 2,500 miles from Lazaruff’s Louisiana birthplace to Sandpoint, Idaho, to be closer to the Beckers.

Dog and humans met at the St. Landy Parish Animal Control near Opelousas, LA, where the Beckers had traveled from Idaho to be part of an American Humane’s event of veterinary healthcare professionals taking part in a massive shelter project. Becker, a board member of American Humane, is best known for his books on pets and animal care, and as the founder of the Fear Free initiative. https://fearfreehappyhomes.com

“After eight hours of non-stop work, in walked, no, wobbled, a skeletal dog, a Pitbull that had been locked in an abandoned home with no food or water and when first rescued as an adult dog (estimated to be three years old) only weighed 19-pounds. He was horrifically emaciated, dehydrated, and near death. Not only were literally thousands of flies (plus fleas and ticks) consuming him from the outside, consuming him from the inside were four kinds of worms and an untold number of immature and adult heartworms,” Becker remembers.

“Teresa and I kneeled and spoke words of love and blessing to him. I sprayed a heart shape onto the palm of my hand with Easy Cheese Cheddar & Bacon and this precious boy came over to lick it off of my hand with his bone of a tail whipping back and forth with such vigor and that it literally lifted alternating back feet off of the ground. I cried. Teresa cried. The room cried. I looked at the dog, and then looked at Teresa. She looked at the dog, and then looked at me. We nodded in agreement. We were going to do whatever it took to try and bring this dog back from eminent death. I think we gave him through tears, the first bath he'd ever had, and his name. Lazaruff,” Becker says.

That friendship between man and beast will accumulate in a happy ending this Easter weekend. By April 22, Lazaruff should be settling down with a hand-selected foster family care as he makes the transition from shelter life to home life. The Beckers plan on visiting him every day.