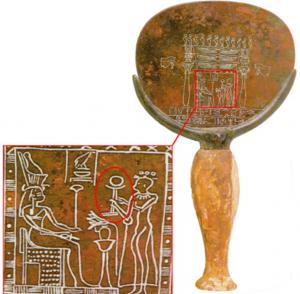 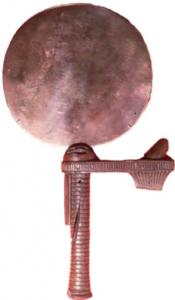 Could Egyptian So-called "hand Mirrors" Have Had A Different Purpose?

James Brown's work has great merit and is an original and thought-provoking work, well worth exploring. I came away felling enriched by the experience.”
— Jack Magnus

PAGOSA SPRINGS, COLORADO, UNITED STATES, October 3, 2019 /EINPresswire.com/ — When archeologists discover ancient objects they tend to identify them by comparing them to something that seems to have a similar purpose in our time. How the modern mind sees and interprets the object may not actually relate to the actual ancient use, and the identification of the object may not align with its original purpose. In this way, some ancient items may have been misidentified because we do not have a “modern” reference to realize their earlier purpose.

Award-winning author James Ernest Brown believes this is true with certain objects from ancient Egypt. The items shown in this article, and many others like them, are on display in the British Museum in London. The items pictures pictured have been identified as “hand mirrors” since they have a similar shape. The objects were found in Egyptian tombs and range in diameter from the size of a quarter to a frying pan—strange sizes for mirrors. The so-called Egyptian hand mirrors had removable handles that were mostly made of bone, wood, or ivory–these materials are non-conductors of electricity. The metal disk, an excellent conductor of electricity, was inserted into an opening at one end of the handle.

The problem with the accepted identification as “hand mirrors” is the objects are made of metals, such as copper and bronze, which are not effective as reflective surfaces, and would not have adequately reflected a person’s face. However, they do have other interesting properties that relate to static electricity. James Brown believes the so-called Egyptian hand mirrors acted as capacitors, capturing static electricity and making the electricity portable.

During his research, James Brown purchased a device from an electrical supply store called a “proof plane” shown above. A proof plane is a round metal disk with a non-conducting plastic handle. It acts as a capacitor that is supported by an insulating handle. The proof plane collects static electricity from a charged object such as sensitive electronic equipment. As the name suggests, static electricity is a stationary electric charge, typically produced by friction, causing sparks or crackling. It is interesting to note that rubbing our hands together produces static electricity that can be captured. Human hands are the highest rated producer of static electricity as rated by the tribo-electic scale.

In modern use, holding the proof plane by the plastic handle, and touching the metal disk to electronic equipment or other charged objects, causes excess static electricity to “jump” or transfer from the object to the metal disk. This protects sensitive electronic equipment from being destroyed. The disk then becomes a capacitor, temporarily storing static electricity in an electric field. The static electricity can be discharged by touching another object to ground it, or the energy can be transferred to something like a Leyden jar to be stored for future use.

It is startling how similar a modern proof plane appears pictured next to a so-called Egyptian “hand mirror.” Some of the Egyptian artifacts are quite large, as mentioned earlier, and could become portable electrical storage units capable of transporting significant amounts of electricity to different locations for various purposes. The separate handles were typically made of non-conductive (insulating) materials like bone, wood, or ivory, keeping the charge in the metal disk. When the metal disk was touched to anything grounded, the accumulated static electricity discharged.

Brown originally discovered the proof plane in an electrical experiment book written for children. The instructions said to glue a copper penny to a wooden Popsicle stick—it worked—the coin is a conductor and the wooden stick is a non-conductor. Sometimes the simplest explanation is best.

James Brown believes so-called Egyptian hand mirrors were used to capture electricity and make the electricity portable. He explores this and many other fascinating ideas about the use of electricity in ancient Egypt in his book Electric Ancient Egyptians: Manipulating Atomic Structure with Human Electricity.
The image shown on the back of an ancient Egyptian so-called “mirror,” and the enlarged inset, shows the object in use. The setting looks like a procedure of sorts and does not seem to indicate a time when the seated queen would be gazing at her reflection. She seems to be inside a ceremonial chamber and is holding an ankh in her right hand a rod or staff in her left hand. The queen sits on a throne with her feet off the ground, indicating she is not grounded to the Earth. An attendant holds the “mirror” as if ready to perform a procedure or ritual. Brown believes this scene depicts the attendant preparing to either remove static electricity from the queen, or energize her further with more static electricity, giving her more power.