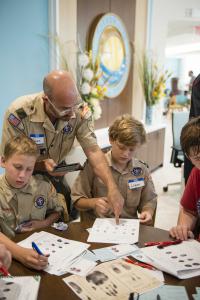 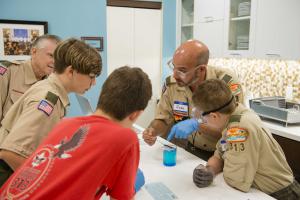 Members of BSA Troop 313 participating in the Chemistry Class of the Merit Badge Academy held at the CCV Center in downtown Clearwater.

…Scouting pushes youth to get in contact with one another and by earning those Merit Badges, to get skills and improve their ability to handle life.”
— Geary Titus, BSA commissioner Tampa Bay area

CLEARWATER, FLORIDA, US, October 3, 2019 /EINPresswire.com/ — Rather than spend a Saturday afternoon glued to video games or their phones, several dozen youth participated in a Scout Merit Badge Academy at the Clearwater Community Volunteers (CCV) Center on Saturday the 28th of September. The hosting troop was Boy Scouts of America (BSA) Troop 313 chartered by the Church of Scientology Flag Service Organization.

Most Scouts earn their Merit Badge at camps that occur only once or twice a month. Scouts from troop 313 wanted to get ahead and help other Scouts to earn the Merit Badges faster. The Academy featured classes on leatherwork, photography, personal management, criminal prevention and finger printing.

“Kids in between ages 8 and 18 spends an average of 7 hours looking at a screen per day,” said Geary Titus, Scout Commissioner for the Greater Tampa Bay area. “On the other hand, Scouting pushes youth to get in contact with one another and by earning those Merit Badges, to get skills and improve their ability to handle life.”

The Merit Badge Academy provided just that, with 6 classes for Merit Badges, five different troops (including a girl troop) and dozens of boys, it was a day without screens where Scouts all learned to work together.

The CCV Center was set up so individual classes could be held throughout the Center. Leatherworks, where boys learned to engrave a leather pouch and sew it was held in the gathering space. Adjacent was the personal management class – even the kitchenette was in use for a class on chemistry.

The Merit Badge Academy was the bright idea of three Scouts from Troop 313. After reading the following quote from the founder of the Boy Scout of America Baden-Powell: “A Scout is never taken by surprise; he knows exactly what to do when anything unexpected happens,” they realized they wanted to give equal chances to other Scout Troops to acquire the skills they were getting.

They also saw many of the younger boys hiding behind their smartphones and not getting as involved in the activities. So they worked with their Scout Master to organize the Merit Badge Academy.

L. Ron Hubbard, Founder of Scientology and Eagle Scout himself, felt that Scouting was very important, writing, “Of all the various information which became important to me, such as photography, woodlore, signaling and many other subjects, the basis of it was laid in Scouting. I am very indebted to a great many, very fine men who gave their time and attention to a restless, boisterous and extremely active boy and teenager, and I must have tried their patience many times but I never heard of it from them.”

Troop 313 is open to boys of any faith, as is any troop of the BSA program. Scouts are encouraged to be faithful and loyal, as laid out in the Scout Oath and Law.

To find out more information about the Merit Badge Academy, please call Michael Soltero at (727) 316-5309 or email ccvcenter@ccvfl.org.

About the Church of Scientology

The Scientology religion was founded by humanitarian and philosopher, L. Ron Hubbard. The first Church of Scientology was formed in the United States in 1954 and has expanded to more than 11,000 churches, missions and affiliated groups, with millions of members in 165 nations. Scientologists are optimistic about life and believe there is hope for a saner world and better civilization, and actively do all they can to help achieve this. The Church of Scientology regularly engages in many humanitarian programs, such as anti-drug campaigns, human rights campaigns and global education programs. To learn more, visit www.scientology.org.