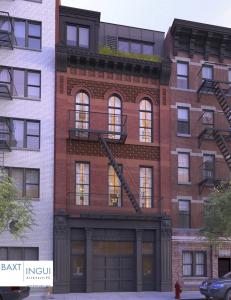 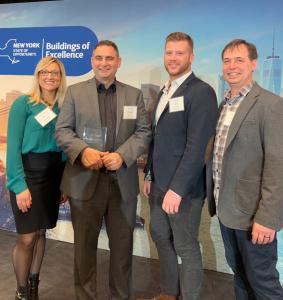 NEW YORK, NY, USA, November 5, 2019 /EINPresswire.com/ — The architecture firm Baxt Ingui received an award for their Engine 16 project last week through the Buildings of Excellence Competition. The Competition recognizes low to zero carbon design and development. The project was selected for being highly replicable and adoptable elsewhere to help bring low carbon and net zero energy buildings to scale in New York State.

Michael Ingui, Amy Failla, and Joey Chemello from Baxt Ingui accepted the award on behalf of the project. Following the ceremony, Ingui expressed his excitement. “It’s amazing to see the amount of talent that this competition brought out.” The Engine 16 project, which is located at 223 East 25th Street in Manhattan and was chosen as one of the Late Design winners, utilizes the Passive House building standard to achieve a low-cost and nearly carbon-neutral renovation of what was once a firehouse. “It’s also reassuring to see that several award recipients also complied with Passive House standards.”

The Buildings of Excellence Competition is being administered by the New York State Energy Research and Development Authority (NYSERDA). The nominated developers and architects were chosen due to their efforts to design, build, or renovate buildings in a fashion that celebrates new and bold aesthetics while also significantly reducing the levels of carbon emissions from more traditional building types. The Competition required each applicant to demonstrate how their project will achieve low carbon performance; be easily replicated and broadly adopted; provide financial benefits to owners; and increase the health, safety, and comfort of occupants.

The Buildings of Excellence Competition is one component of Governor Andrew M. Cuomo’s Green New Deal, the most aggressive climate change program in the nation and New York State’s mandate to reduce greenhouse gas emissions by 85 percent by 2050 and transition to a carbon neutral economy.

The award ceremony was attended by award recipients, design teams, and members of the press, and included introductory remarks from Lieutenant Governor Kathy Hochul; New York state Sen. Brian Kavanagh; Alicia Barton, President and CEO of NYSERDA; Mark Vincent Kruse, the 2019 President of the New York chapter of the American Institute of Architects; Brendan Hall, the Government Affairs Chair of the Central New York Chapter of the ASHRAE; and Richard Yancey, Executive Director of the Building Energy Exchange.

When the Competition was launched in March 2019, NYSERDA intended on awarding $30 million over three rounds in the following categories: Early Design, Late Design, Under Construction, and Post-Completion Performance Optimization. However, the response was so strong that NYSERDA increased the award amount to $40 million over three rounds. NYSERDA launched the second round of the competition at the event, offering $10 million with up to $1 million for the category of Early Design and $750,000 for the category of Late Design.

A full listing of the winners can be found on the Buildings of Excellence website here https://www.nyserda.ny.gov/All-Programs/Programs/Multifamily-Buildings-of-Excellence/Winners