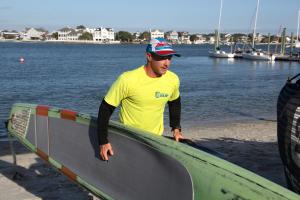 Jarrod Covington of Wilmington, NC – Courtesy of Robert B Butler 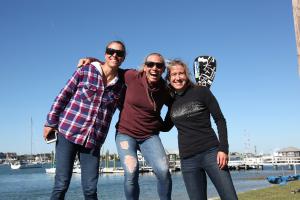 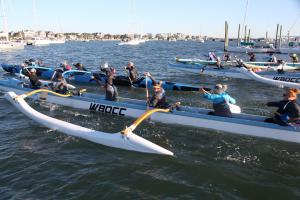 Jarrod Covington of Wilmington, NC, and Stephanie Shideler of Southold, NY, were crowned the new elite male and female champions

WRIGHTSVILLE BEACH, NORTH CAROLINA, USA, November 7, 2019 /EINPresswire.com/ — Canceled last year following one of the worst hurricanes in state history, North Carolina Surf to Sound Challenge rebounded in Wrightsville Beach this weekend with nearly a 50-percent growth compared to 2017. “The biggest thing that impressed me about this race was the number of every-day paddlers that signed up and participated,” said Race Director, Mark Schmidt.

According to Schmidt, 2019 turned out to be the largest Surf to Sound Challenge ever, with 119 participants compared to approximately 80 in 2017. The increase is due to local and regional signups and a growing interest in the variety of paddle races on the schedule, including the sport of outrigger canoe (OC), rapidly increasing in popularity in the mid-Atlantic.

Weekend weather conditions were brisk and favorable as fall weather moved into North Carolina. However, racing conditions were especially challenging on Saturday in the ocean and sound. According to the US Coast Guard crew on watch from Wrightsville Beach, seas were 4-5 ft. with unrelenting winds of 15 mph. On Sunday, the winds abated somewhat, with afternoon temperatures rising into the low-60s.

Jarrod Covington of Wilmington, NC, and Stephanie Shideler of Southold, NY, were crowned the new elite male and female champions in Saturday's 6.5-mile Surf to Sound title race. Covington owns the outdoor recreational company Wrightsville SUP, and Shideler is a former Wall Street banker who gave it up to pursue her passion for the paddling sport. Shideler will represent the USA in the ISA World Standup Paddleboard Championship in El Salvador in late November.

The Big Boss Brewing Company in Raleigh captured the title in the Corporate Challenge Relay.