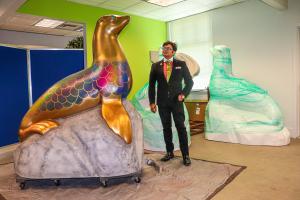 George Jacob, President & CEO of Aquarium of the Bay examines the first painted gold sea lion with fish scales in the Farallon Hall

As part of the largest public STEAM initiative in California, 30 six foot tall Sea Lion Statues exclusively painted by 30 Bay Area artists will dot different spots on the Embarcadero in late January, where they will remain on display for the remainder of 2020. A jury drawn from the Aquarium of the Bay, San Francisco Environment, Golden Gates Parks Conservancy and Pier #39 selected the winning entries. This project brings together elements of science and arts in an innovative array of messaging focused on sustainability and ocean conservation. Each Sea Lion holds a QR code that takes the user to a multi-lingual VUTAG information landing page that holds the artists statement, STEAM (Science, Technology, Engineering Arts, and Math) education component and the mission of Bay Ecotarium which operates the Smithsonian Affiliated Aquarium of the Bay on Pier #39). Made with fiber glass, the full-size Sea Lions tell a story of ocean habitat, pollution, increasing carbon footprint of growing public consumption and mobility of sea faring goods, Ocean acidification, micro-plastic ingestion and sea level rise tied to Climate Change. The Sea Lions have been arriving at Pier #39 following the last major earthquake in San Francisco. 2020 marks their 30th anniversary on the Pier 39. Initially regarded as pests, they soon took over the K-Docks, becoming an instant tourist attraction and one of the most photographed destination in the Bay Area. "One can hear them bark boisterously and can smell them from a distance, long before one can spot them! The naturalists from the Sea Lion Center and Aquarium of the Bay, offer regular education programs on the site", says President & CEO George Jacob, who conceived this initiative in partnership with PIER39 on the embarcadero- the most visited destination in San Francisco. Look out for program details at bayecotarium.org and at aquariumofthebay.org websites. In addition to the 30 sea lions, there is also an exciting drive to paint 3000 mini sea lions to set a new world record of sorts!