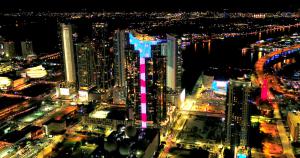 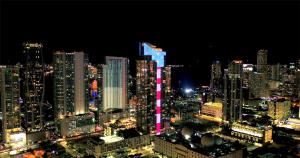 The stars and stripes shining on the skyline salute our healthcare professionals; our first responders; the national guard; those who have tested positive; and those who have passed.”
— Daniel Kodsi, CEO-Developer, Paramount Miami Worldcenter

MIAMI, FLA, USA, March 29, 2020 /EINPresswire.com/ — In the midst of the national coronavirus crisis — a brilliant beacon of patriotism, unity and fortitude is now flying high in the sky above downtown Miami. It is the nation’s largest electronic American flag — displayed on the new 700-foot, $600-million Paramount Miami Worldcenter tower in downtown Miami. ( B-ROLL CLICK HERE )

“This vivid patriotic presentation is a signal to all Americans that we, as a nation, shall remain steadfast and will overcome adversity,” says Paramount CEO-Developer Daniel Kodsi (Cod-See).

Community leaders say the massive 693-foot glowing vertical stream of rippling red and white stripes and the enormous 150-foot-tall by 300-foot-wide field of fluttering five-pointed stars will be illuminated every half-hour, from 4:30 AM to 7:00 AM and from 7:30 PM to 11:30 PM.

“The stars and stripes shining on the Miami skyline salute our healthcare professionals; our first responders; the national guard; and those who have been infected, including our mayor, one of our congressmen, thousands of Floridians and other Americans,” says Kodsi. He concludes, “Most of all, these lights burn in remembrance of those who have passed.”

“There are 14,300 individual light emitting diodes (LED) embedded in more than 10,000 panes of high impact glass on Paramount Miami Worldcenter,” explains Kodsi. The lighting system requires 15,000 watts of electricity, which can create a combination of 16.2-million colors. It took three years to design the lighting system and took a team of 12 technicians 10 months to install it.

Paramount is the sixth-tallest building south of New York City. It is the soaring signature skyscraper of Miami Worldcenter, which is currently America’s largest urban construction project and the nation's second-largest real estate development.

Among its 41 unique amenities is America’s first Jetsons-Style flying cars SkyPort and the country's largest elevated urban deck. The deck is situated atop the building's garage and features four-acres of resort style pools, bungalows, tennis courts, and a soccer field overlooking downtown Miami.