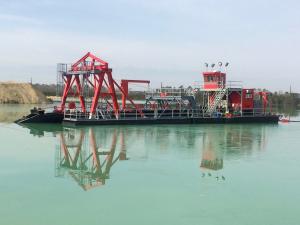 TUCKAHOE, NEW JERSEY, USA, April 30, 2020 /EINPresswire.com/ — The electric powered dredge utilizes a Cutterhead and an Underwater Pump design on an 85-foot ladder that is capable of mining sand and gravel at depths up to 62 feet when the ladder is at a 60-degree angle. The Toshiba electric motor that powers the dredge greatly reduces air, water and noise pollution versus traditional diesel-powered dredges.

Tuckahoe Sand & Gravel, which is a subsidiary of Johnston Enterprises, produces concrete sand and also has a distinguished reputation as one of the largest suppliers of high-quality Golf Course Sand on the US east coast.

Tuckahoe S&G acquired this new dredge to substantially increase their annual mining production. They chose Custom Dredge Works to design and manufacture their new dredge since Custom Dredge Works is widely recognized as the leading dredge manufacturer in the US Aggregate Mining Industry today. Tuckahoe’s Plant Manager, Ron Sutton, has expressed great satisfaction in the increased production output they are achieving with their new Cutter Suction Dredge. A video of the new dredge can be seen on the Home page of Tuckahoe’s web site (http://www.tuckahoesand-gravel.com).

CDW President, John Jones commented, “I was personally involved in every aspect of the design and construction of this new dredge from early design concepts through completion. I am extremely proud of the finished product and the very positive results it is achieving for our client.”