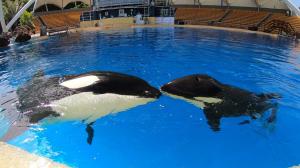 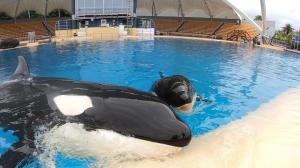 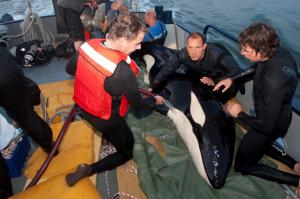 Taking advantage of the date and the fact that Morgan is deaf, the Park wanted to draw attention to serious consequences of underwater noise on the cetaceans

Morgan was able to integrate easily and has managed to establish positive social bonds so that in Sep 2018, she gave birth to her first baby, Ula. Today, both live in perfect harmony with each other.”
— Dr. Javier Almunia, PhD, Director of Loro Parque Fundación

PUERTO DE LA CRUZ, SANTA CRUZ DE TENERIFE, SPAIN, June 24, 2020 /EINPresswire.com/ — Today, Wednesday 24th June, Loro Parque commemorates the 10th anniversary of the rescue of the orca Morgan. Taking advantage of this occasion, the Park has uploaded an emotional documentary to its social networks in which it tells its story of overcoming and survival, as well as a report in which the protagonists of the rescue tell their experience. In addition, it wanted to draw attention to the serious consequences that underwater noise has on the lives of cetaceans, this being a possible cause of the deafness that Morgan suffers.

Although this cannot be known for sure, an increasing number of cetaceans appear to be stranded with hearing problems. And scientists have shown that noise caused by human activities at sea is disturbing underwater soundscapes, animals and marine ecosystems.

For this reason, Loro Parque assures that it is time to take action to protect the animals from the negative effects of noise, something that Loro Parque Fundación is already working on through different projects. One of these projects is the demand to extend the moratorium on medium frequency military sonar in the Canary Islands to the whole of Macaronesia, in an initiative that has the unanimous support of the Government of the Canary Islands and the MEPs from the European Outermost Regions.

Also noteworthy is CanBIO, a project co-financed by Loro Parque and the Government of the Canary Islands with 2,000,000 euros to study the effects of climate change on the sea in the Canary Islands and Macaronesia. Thanks to this project, two permanent underwater monitoring stations for acoustic quality in the archipelago analyze the evolution of noise over time and monitor the underwater soundscapes of the Canary Islands. One station is already in operation in the Bay of Gando, in Gran Canaria, and another one will be operational by the end of the year in El Hierro.

Morgan: a survival story with a happy ending

It was on 24 June 2010, now 10 years ago, that this killer whale appeared on the coast of the Netherlands. It was just a baby and found itself alone, dehydrated and malnourished, almost on the verge of death. Thanks to her rescue and the efforts of many people to ensure that she did not die, she was able to recover completely in a few months at the Harderwijk Dolphinarium in the Netherlands.

However, her family could not be found, so she could not be returned to the sea and there were only two alternatives: euthanasia or integration into a group of killer whales under human care. The Dutch authorities, after studying her case, decided that the best place for her was Loro Parque and the zoological park located in Puerto de la Cruz, Tenerife, accepted their request for help.

Soon after, her caretakers detected that Morgan was not responding to acoustic signals and a group of experts found that she was deaf, which would prevent her from hunting, orienting herself and communicating underwater. However, in order to interact with her, the trainers at Orca Ocean in Loro Parque devised and developed a light-based communication system that is unique in the world.

As a result, Morgan was able to integrate more easily and has managed to establish such positive social bonds within the group that, in September 2018, she gave birth to her first baby, Ula, who is the youngest and growing up healthy and strong. Today, both live in perfect harmony with each other.