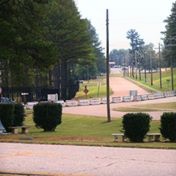 A 2010 photo of the road blocks at Fort McClellan, Alabama leading into one of the main marching fields known as Marshall Field.

Recent Civil Rights Rallies Have Called Attention To The Military Use of Riot Control Gas.

ALBANY, NEW YORK, UNITED STATES, July 6, 2020 /EINPresswire.com/ — A national group of medical patients who are former military service veterans of Fort McClellan, Alabama, have been working since the year 2003 to have the Dept. of Veterans Affairs recognize the use of CS Riot Control Gas as a contributing disability cause stemming from a multiple-spill contamination zone that was discovered there in the 1990s.

CS Riot Control Gas was used extensively at the base in a variety of outdoors field maneuvers, from the Korean War era years until 1998, when the federal ownership of the base came to an end and it was closed. As a singular training chemical, the use of CS Gas is normally safe. But at Fort McClellan, there were other contributing toxic sites at play. The veterans group says the other combined spill sites were significant enough to consider the use of CS Gas as a cumulative health risk to the soldiers who were stationed there at the time. Environmental engineering reports and shipping records have established the fact that two versions of the Riot Control Gas were used at Fort McClellan. In military training, the more commonly used version of the gas is diluted down to a lower strength and is referred to as a “simulant”. But other papers also show that live-agent CS Gas was used at McClellan Army base prior to 1998.

In 1989, the American Medical Association revised the toxicity science for CS Gas to show that it can contribute to or cause asthma or other moderate respiratory conditions as a long-term health condition. In the VA disability claims process, these long-term health conditions are often referred to as “delayed onset conditions”. Although the Center for Disease Control does recognize the new science findings, the veterans say that the VA has failed to update to the new science changes.

The group calls themselves Toxic Exposure Army Veterans of Fort McClellan and can be found on Facebook. They are hopeful that the recent attention that’s been drawn to the use of gassing protest marchers, will help to increase the public awareness about their own military service efforts in Washington to get the VA to recognize their claims.

After the McClellan Vets had entered the VA disability claims process, they discovered that the VA was not using licensed Environmental Health doctors to either conduct disability exams, or to staff accessible clinics at the VA Hospitals for toxic exposure reviews they may need on demand. They also discovered that the claims rater workforce that VA is using to deny their disability cases with, is a clerical workforce with only a minimal high school education and having no specialized medical backgrounds.
#####

The medical patient veterans who make up the national stakeholder’s group of Toxic Exposure Army Veterans of Fort McClellan, are from all branches of service. The group was started in 2003 and has been working tirelessly at various points in Washington DC to overcome the process obstacles that are posed to us at the VA agency. Army veteran, Sue Frasier, is the founder of the group and works in meetings across Capitol Hill to advocate for their cause. Most of the veterans have returned back to their home states and don’t live in Alabama. Because of our age group, many of the veterans do not have the necessary computer skills to place them online. Those few who can be found, are organized on our Facebook page and through email chains. Our numbers are far greater offline than what we have located online. The pre-screening effort is accomplished by asking the veterans to review health science papers that are matched to the known toxic sources from Fort McClellan. This is to determine if they are a medical match for VA processing purposes. Most of the veterans are fully diagnosed at this stage of their lives, and many are already getting treated inside the VA Hospital system. Others have not yet been told about the contamination zone and are still getting treated in private care, but without this important medical information made available to them.

LINKS TO SUPPORTING MATERIALS FOR INTERESTED REPORTERS TO DEVELOP THEIR STORIES FROM.

A]. This is a LINK to the 3-page excerpt of the 1977 Aberdeen, MD environmental site report of Fort McClellan, showing the dispensed inventory that was used for both live-agent CS Riot Control Gas and the diluted simulant version. (3 pages PDF not copyrighted)
https://drive.google.com/file/d/1L9w9RSKvIT02BIvgkhvqByCMChnXIcV2/view?usp=sharing

B]. The LINK here goes directly to the Center For Disease Control and shows the long term health outcomes for exposures to CS Riot Control Gas (web page).
https://emergency.cdc.gov/agent/riotcontrol/factsheet.asp

C]. This next LINK goes directly to the published JAMA science paper of 1989 that revised the toxicity science for use of CS Riot Control Gas. The VA has not updated to this new finding in the sciences (web page).
https://pubmed.ncbi.nlm.nih.gov/2501523/#:~:text=Severe%20traumatic%20injury%20from%20exploding,%2C%20carcinogenic%2C%20and%20reproductive%20effects.

D]. This is a PowerPoint slide showing the narrative summary of how CS Riot Control Gas was used on the veterans, based on what is showing in the Fort McClellan environmental engineering papers. 1 page, PDF not copyrighted.
https://drive.google.com/file/d/1zCz-PLyQd2kAeMRflHzL4FT8sHfhlU1C/view?usp=sharing

E]. This LINK goes to a 2-page PDF scan copy of the biography of VA exam doctors that were used in the disability case of activist Sue Frasier. Neither doctor is licensed in the practice of Environmental Health. It was also discovered that VA doctors are blocked from seeing the veterans active duty treatment records by the exam computer system. 2 pages PDF original work not copyrighted.
https://drive.google.com/file/d/1oNxDGDl1nosR40xEKchJzR3VfW8_6Bth/view?usp=sharing

F]. This final pair of LINKS goes to the policy doctrine regulations for the Environmental Protection Agency that advises against multiple, low-level exposure incidents to humans. The veterans say this regulation was breached at Fort McClellan prior to 1998. online web page.
40 CFR 1508.7 Cumulative Impact
https://www.law.cornell.edu/cfr/text/40/1508.7