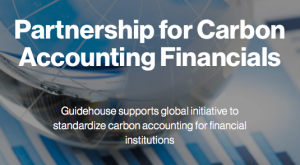 Measuring the carbon impact of loans and investments is a fundamental building block for further climate actions.”
— Ivan Frishberg, director of impact policy for Amalgamated Bank

WASHINGTON, D.C., USA, August 28, 2020 /EINPresswire.com/ — For the first time, banks and other financial institutions are collectively voting to go green by examining the carbon impact of their lending and investing, according to a Forbes.com article by veteran energy and environment writer Llewellyn King.

Led by the globe-circling consulting firm Guidehouse, nearly 70 major banks and investment houses on five continents with total financial assets for more than $10 trillion are collaborating in the Partnership for Carbon Accounting and Financials (PCAF). The organization’s members include Amalgamated Bank, Bank of America, Citibank, NatWest, Morgan Stanley, and BlackRock, according to the Forbes article.

King said that Jan-Willem Bode, a Guidehouse partner based in London, told him that the harmonization of analysis and reporting will be critical as the energy industry seeks to cut energy emissions. Bode said this analysis will range from big project loans to mortgages, which are important. Banks, he said, can reduce emissions by lending to homeowners who install solar. Bode was a guest on “White House Chronicle,” on PBS for which King is the executive producer and host.

In the article Ivan Frishberg, director of impact policy for Amalgamated Bank, said, “Measuring the carbon impact of loans and investments is a fundamental building block for further climate actions.”

PCAF is the extraordinary brainchild of Guidehouse, which provides the secretariat, King said. It began in a small way in Holland and has spread dramatically in the past two years to major financial institutions in Europe and the United States. Now Guidehouse said it is talking to banks in Asia and Latin America.

King said, “I think this is the most significant climate mitigation development in a while, but it’s been surprisingly under-reported. It's a big deal.”