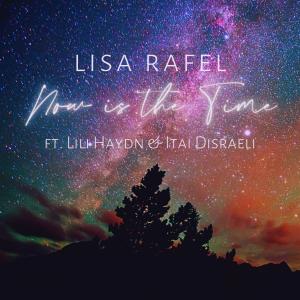 “Now Is The Time” Cover

NASHVILLE, TN, US, November 19, 2020 /EINPresswire.com/ — Over the past weeks, the nation has seen the impact that a single vote can make. We witnessed the results of action being taken and in turn welcomed President-elect, Joe Biden, and while change may be around the corner, the issue of climate change and pollution remains at the forefront.

In response, poet, singer/songwriter, and grandmother of seven, Lisa Rafel penned and recorded the global awareness spoken word, new-age song “Now Is The Time” featuring Lili Haydn and Itai Disraeli from the Grammy Award™ winning band Opium Moon. Along with the single release, is the release of the “Now Is The Time” video via Nashville-based record label United Alliance Music Group (UAMG) and its affiliates Sony Music/The Orchard.

Lisa Rafel states: “Now is the time to act, to ask wise elders and young passionate people to come together – it’s time to raise awareness, to bridge oppositional thinking, to support solutions and help everyone to understand that fostering pollution is not a livelihood, it is the devastation of health and well-being for all future generations”.

"Now is the Time" Is a powerful song and video that emotionally connects to the depth of the pollution crisis and asks, what can we all do to solve it? Rafel hopes this video and song moves people to action, specifically regarding the upcoming Georgia U.S. Senate runoff election. Now more than ever, it is crucial that positions of power be held by individuals who care about the future of this planet. Her website includes links to environmental organizations, Georgia voter information, and how to contribute before the upcoming run-off election.

About Lisa Rafel:
Lisa Rafel has spent her professional life fulfilling creative expression and teaching internationally about alternative forms of healing. An award-winning author and songwriter, she is a playwright, performance artist, poet, and chantress. Lisa has performed in concert in sacred sites all over the world. She continues to teach ways to be courageous, compassionate, and kind.

About United Alliance Music Group:
United Alliance Music Group (UAMG) is a record label located in Nashville, TN. With over 25 years of experience, UAMG is the home and digital distributor through its Sony/Orchard distribution partnership and physical via New Day Distributors for many award-winning and celebrated established and emerging artists such as Jekalyn Carr, Titus Showers, Bryan Popin, CMT "Music City" cast star Jessica Mack, Joe Pace, Lamar Campbell, and many more. UAMG was launched with the desire to give indie and veteran artists the tools to succeed in the current musical landscape by empowering them with creativity, inspiration, and control.

“Now Is The Time” Official Video