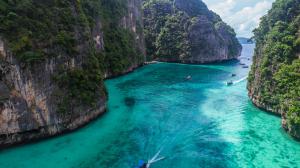 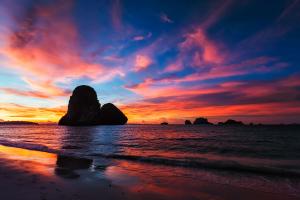 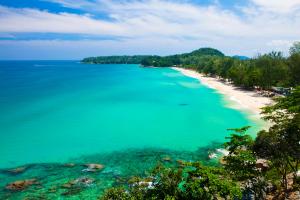 COVID19 has changed the world as we know it, but there have been some substantial positive environmental changes due to the reduced tourist numbers.

PHUKET, THAILAND, March 6, 2021 /EINPresswire.com/ — 2020 was full of challenges for everyone. With the global pandemic continuing into 2021, many people worldwide are still facing many of these challenges.

Unemployment rates have skyrocketed, many businesses have had to close their doors permanently, numerous people cannot afford to pay their bills and are facing eviction, and the hospitality and tourism industry has pretty much come to a stand-still. Even though the Covid-19 pandemic has significantly caused the economy to deteriorate, it has in many ways had positive effects on the environment, specifically, Phuket, Thailand's environment.

Thailand gets millions of tourists each year. Tourism is also one of Thailand's most significant money-making industry and provides thousands of Thai people with jobs. Thailand is a top-rated travel destination in Asia, and the country exceeds its tourism capacity. However, over the years, with so much tourism, it has harmed the environment.

Even though the Corona Virus outbreak has had a devastating impact on the economy and caused tourism to become completely non-existent, it has benefitted the environment in unexpected ways. There were 11 rare sea turtle nests found on the beaches, for starters, which is the most considerable amount of nests seen in Phuket in 20 years. Additionally, over 200 endangered green turtle eggs hatched in Samui, and numerous leatherback turtles were returning to lay even more eggs in Phangnga and Phuket. Typically, the turtles' places to spawn are ruined by humans, and the turtles get killed by fishing gear or human negligence on the beach. Without all of the tourists there and fewer people on the beach, they have had time to regenerate and rapidly breed, which has immensely helped the species!

There has also been over 80 Blacktip reef sharks spotted in numerous places around Thailand. Ten sharks were seen whilst diving in Phuket, a school of 50 sharks seen in Krabi, another 20 spotted near the Similan Islands National Park. Plus, over 100 bottlenose Dolphins have been seen as well. Although they are not considered endangered, "the International Union for the Conservation of Nature" (IUCN) considers them to be near threatened as the population has decreased. However, since the closure of Maya Beach and other areas, researchers have noticed an increase in the amount of Blacktip reef sharks in the area. Again, this is because there have been no humans around, and they have had time to reproduce and will continue to do so without disruption.

Another positive thing that has taken place since the Covid-19 outbreak is fishers are selling their old fishing nets. They are being made into numerous items, including protective masks, push sticks and disinfectant bottles. Fishing is one of Thailand's biggest industries, but it is also one of the biggest ocean polluting industries.

Thousands of nets are used every year, and many of them get lost or thrown into the sea once the fishermen are done with them. Unfortunately, these loose nets will catch endangered animals, and they are unable to free themselves and wash up on the shore and die. Repurposing these old fishing nets into protective equipment not only helps people stay safe during the pandemic, but it also helps the environment and aquatic life by not having the loose nets capture endangered species.

Overfishing has been a significant problem in Thailand, but now it has been dramatically cut down. There is less demand for mass amounts of fish due to the virus, which will help species continue to grow and repopulate. The pandemic has also caused a level of awareness amongst the people of Thailand and the Thai Government. People realize that it is vital that we focus more on the environment, including taking measures such as switching to line fishing over net fishing and minimizing the number of tourists visiting – this will protect places such as Phi Phi Island.

To keep these constructive changes going, Thailand must implement the "Blue Economy", which is actively managing and sustaining the ocean's resources and preserving its health. In the past, the Thai government have attempted this, but unfortunately, they have been unsuccessful. Yes, the ocean and aquatic wildlife have seemed to be recovering somewhat quickly. However, for the repairs and regeneration to continue, it is vital that the "Blue Economy" is followed and taken seriously. Even though Covid-19 has temporarily ruined the economy worldwide, it has brought the importance of the "Blue Economy" to the attention of Thailand. Now it the Thai government is responsible to quickly implement the "Blue Economy" to avoid any further deterioration.

Covid-19 has drastically affected the entire world and has changed our everyday life now and in the future. Somethings are changed for the better, and others for the worst. However, everything does happen for a reason and all we can do it learn and change our ways to better ourselves in the future. The natural resources should not be overused, or else we will end up destroying them for good. We need to look at all of the positive changes that are going on and continue helping species repopulate and focus on the health of the environment and animals rather than just tourist numbers.