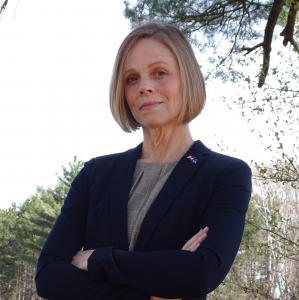 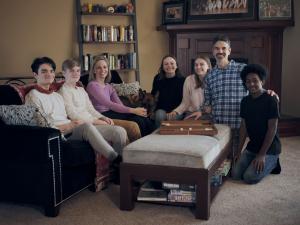 Gillian Battino and her family in the living room of their Wausau, WI home. (From left to Right: Asa, Abel, Gillian, Stella the dog, Ellie, Lily, Ben, and Ben Jr. [Anabel not pictured]) 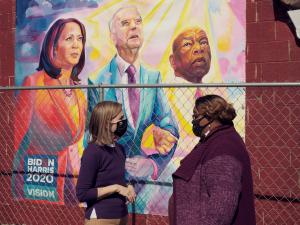 Mother, Doctor and Democrat to Build a Brighter Tomorrow for Wisconsin

I want to ensure that my daughters and all our children experience better and have better.”
— Dr. Gillian Battino, Candidate for U.S Senate

WAUSAU, WISCONSIN, UNITED STATES, May 8, 2021 /EINPresswire.com/ — Dr. Gillian Battino announced her candidacy for United States Senate on May 8 in a launch video and in a speech live-streamed to grassroots supporters and community leaders, emphasizing Wisconsin’s demand for a leader with real-world experience in the issues challenging the state and the nation today.

“For over 20 years, I’ve built my career in medicine and public health on integrity, advocacy, and action. I’ve spent my career serving the people of Wisconsin and helping women in the fight against breast cancer. As a doctor and scientist, seeing Senator Ron Johnson spread vaccine misinformation and conspiracy theories on the Senate floor disgusts me. So, I’m stepping up, because we need smarter, stronger, more caring leadership.”

Gillian graduated from John Carroll University with her Bachelor Of Science in 1992. Following her undergraduate career, she attended Ohio State University – College of Medicine. She earned her M.D. in 1996 from Ohio State. Currently, Gillian is a practicing radiologist in Central Wisconsin. She hopes to bring fresh perspectives to Washington and address the challenges that Senator Ron Johnson has failed to during his tenure.

“I understand, on a personal level, what poverty does to health and what poor health does to a family. And as a physician, I fully believe that health care is not a privilege — it is a human right.” Battino said.

She noted that while the Affordable Care Act was a big step forward in policy, the pandemic demonstrated the flaws in the American health care system.

We cannot have a system where millions of Americans are falling through the cracks. Now is the time to work together for Medicare for all,” Battino continued.

When Gillian was not yet two years old, her father passed away, stemming from a childhood infection that went untreated due to a lack of access to health care. This influenced her passion for working with health care accessibility that led to working in low-income countries. Internationally, Battino has collaborated with the World Health Organization and the PanAmerican Health Organization to train Guyanese doctors and develop Guyana’s first-ever radiology residency program.

Battino, a mother of six, also emphasized her support for progressive education and labor reform.
“Every child, from birth clear through to college graduation, deserves equitable education opportunities. We can and we must provide the tools to achieve these opportunities — because, in doing so, we are not only creating building blocks for our children’s futures, but for our nation’s as well, Battino said. “And when our children get those first jobs, I want them to be good jobs with a living wage. That is why we need to defend our unions.”

Her passion for the issues is rivaled only by her commitment to fighting for people of every race, gender identity, sexuality, and ability. Battino gave a personal anecdote: “As someone who faced gender discrimination during my career and watched my mom encounter it before me, I want to ensure that my daughters and all our children experience better and have better. We can combat discrimination, we can combat racism, but we can only do it together.”

By leading on policy and planning to engage with voters, Battino believes she will lead the best campaign in the race.
“We can make politics better. We can make our society better. And we can make our country better…So, join me as we build these ideas into action.”

For A Brighter Tomorrow