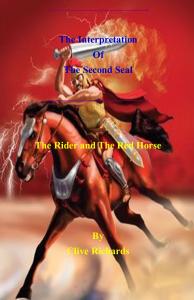 The Rider and The Red Horse

ATLANTA, GEORGIA, UNITED STATES OF AMERICA, June 23, 2021 /EINPresswire.com/ — Most people may say that the words that are written in the Book of Revelation are only for the end of time, but they’re not. Some, after they’ve discerned the hidden meaning of certain sections of Revelation, may say, oh, most of these things have been going on since the beginning of time, since the time when Cain killed Abel, his brother, because of envy and jealousy, and so on afterward, from generation to generation. However, the Book of Revelation doesn’t only speak about the end of time, it sums things up in a shorthand way by speaking about the beginning of time, the past, and the future.

Take the example of a stenographer. Stenography is likely one of the most identifiable methods of recording the spoken word, as stenographers have been a familiar sight in courtrooms for the better part of the nineteenth and twentieth centuries.

Stenography, in short, is the act of recording spoken words through using a stenotype machine. Whatever stenography system is used, the ultimate goal is to record the spoken word verbatim.

The Mystery of The Rider and the Red Horse
Here is how the words are written in the Book of Revelation:
Now, a lot of things that are written in the Book of Revelation that are supposed to be happening in the last days have also been happening since the beginning of creation. However, the meanings to these things were sealed. But after Jesus opened all the seven seals, one at a time, each seal revealed its own meaning. Although the seals were sealed, they were written in codes.

Most of the human race would not have an understanding of the symbols, for these things were kept as secrets from their mind. Anyway, I, Clive Richards, will give you the meaning of most of these things, as they’ve been revealed to me. Most of what is written in the Book of Revelation are symbols and shorthand.
Therefore, just as a stenographer types spoken word in a shorthand way within the courtroom as the words are spoken or a stenotype machine is used, so is the Book of Revelation written in shorthand.

Therefore, it is stated in Revelation 6:3, that:
3When the Lamb opened the second seal; John heard the second living creature saying, “Come and see!” 4Another horse, fiery red, went out.

The meaning to this red horse represents blood.

And it was granted to the one who sat on it to take peace from the earth.

If you would like to know the rest of the meaning of the Second Seal, and also the rest of the information about the Red Horse, you may purchase the book that’s available in book stores and online everywhere.