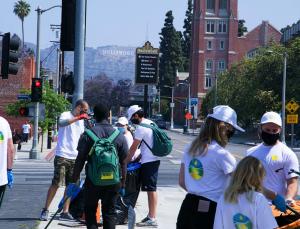 With restrictions lifted and the summer about the begin, the Church of Scientology organized a neighborhood cleanup to make Hollywood more inviting to visitors and local residents. 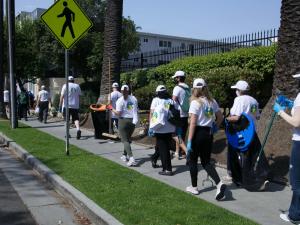 Some 50 volunteers took off from the Church of Scientology Celebrity Centre in Hollywood. 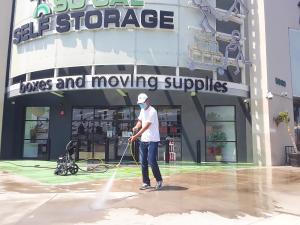 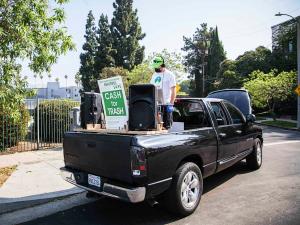 The Church of Scientology promoted the Cash-for-Trash initiative: homeless people are invited to collect trash and bringing it to weigh stations where they are paid for their work in cash. 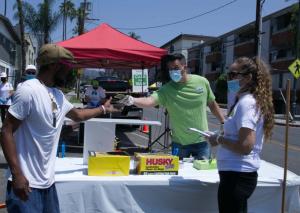 Cash-for-Trash was originated by a local entrepreneur to give those down on their luck a way to earn some cash by cleaning up the neighborhood.

With COVID restrictions lifted in Los Angeles, the Church of Scientology held a cleanup to make Hollywood more welcoming to visitors and residents.

LOS ANGELES, CALIFORNIA, UNITED STATES, June 24, 2021 /EINPresswire.com/ — Restaurants, clubs and other local businesses breathed a sigh of relief last weekend when Los Angeles finally reopened after 16 months of COVID-19 restrictions. To back this up, the Church of Scientology Celebrity Centre held a "Hollywood Village" cleanup to make the neighborhood safe, clean and friendlier to visitors and residents.

Unhoused people were invited to join in the Cash-for-Trash initiative that is funded by local businesses. The Cash-for-Trash program was launched by a local entrepreneur shortly before the pandemic put the Hollywood Village cleanups on hold. Through this program, those suffering from homelessness are invited to earn cash by collecting trash and bringing it to weigh stations where they are paid for their work in cash.

After the cleanup, volunteers handed out copies of The Way to Happiness, a common-sense nonreligious moral code written by humanitarian L. Ron Hubbard containing 21 precepts to guide people to make better choices in their lives. One of the precepts, “Safeguard and Improve Your Environment,” inspired the neighborhood cleanups. It states:

“Care of the planet begins in one’s own front yard. It extends through the area one travels to get to school or work. It covers such places as where one picnics or goes on vacation. The litter which messes up the terrain and water supply, the dead brush which invites fire, these are things one need not contribute to and which, in otherwise idle moments, one can do something about.”

Hollywood Village was initiated and organized by the Church of Scientology in coordination with The Way to Happiness Foundation and the L.A. Police Department. It operates with the support and partnership of many community organizations, local businesses and schools, and the participation of people of all faiths and backgrounds, working together to uplift the neighborhood and carrying out their motto of keeping Hollywood beautiful, safe and clean.