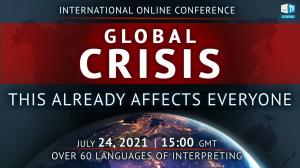 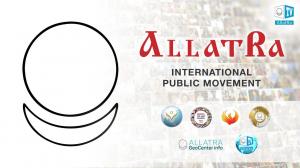 We are honored to invite Bill Gates as a speaker at the conference "Global Crisis. This Will Affect Everyone" – simultaneously translated into 60 languages.

The World Awaits for Bill Gates To Make Statement at "Global Crisis. This Will Affect Everyone" International Conference As An Honorary Speaker and Humanitarian.”
— – ALLATRA IPM

SEATTLE, WA, USA, June 24, 2021 /EINPresswire.com/ — ALLATRA International Public Movement invites Bill Gates as an honorary speaker at the international online conference "Global Crisis. This Already Affects Everyone" which is an event of utmost importance for our civilization.

Bill Gates's drive for innovation and technological advancement is notable around the globe! We invite Bill Gates to make history with us on July 24, 2021, at 15:00 GMT. We are honored to invite Bill Gates as a speaker to the biggest global online conference "Global Crisis. This Will Affect Everyone." It will be simultaneously translated into over 60 languages and streamed to 1000s of platforms, with millions, if not billions, of people tuning in to watch it LIVE.

We would like for Bill Gates to address the World under topics of:
(1) Technology-driven displacement of jobs threatens to significantly disrupt the global economy;

There's a massive demand from people for Bill Gates's presence at the conference. The official letter of invitation has been sent to Mr. Bill Gates and the whole world is awaiting confirmation and appearance. We look forward to receiving Bill Gates's response soon.

This global conference is an initiative of volunteers from over 180 countries, who are striving to disseminate the message about the upcoming global crisis which will affect every person on the planet. You, as a world-renowned scientist and visionary, know the problems with which humanity will be faced in the near future and it is important to find solutions together.

The speakers and participants of the conference consist of world businessmen, economists, innovators, scientists, researchers, as well as highly distinguished representatives of various countries.

The drastic changes, which we are to face as a civilization are going to bring a dramatic shift in the way we live. Understanding it is a vital need. The sooner we become aware of the real scale of decisive risks, the more possible it is to deal with them as a unified world community.

On July 24, 2021, at 15:00 GMT, a live broadcast of the conference will be streamed on thousands of media channels and platforms with simultaneous interpreting into more than 60 languages.

Key topics of the conference:
● Digital transformation, the introduction of high technology based on artificial intelligence in various fields of the life of world society: risks and benefits.
● The fourth industrial revolution and a threat of mass unemployment.
● Future without jobs. Causes of the inevitable collapse of the world economy if the consumerist format is preserved.
● Radical changes in all spheres of society.
● The problem of overpopulation.
● Rapid depletion of the planet’s resources.
● Global climate change.
● Cyclicity of geological events that depend on external factors.
● Importance of every person in building the Creative Society.
● Survival of humanity and revival of civilization.

Modern civilization has reached the point of instability and global crises. The global financial, economic, environmental, anthropological, and climate crises are realities that every person is already facing. But this is only the beginning. Do people realize the full scope of the upcoming threats? Radical changes in all spheres of life in the near future are inevitable for every person on the planet. Yet, how aware is the world community of these changes, not to mention being prepared for them?

Join us together with Mr. Bill Gates on July 24th, 2021. At this conference, volunteers from around the world, people who have a realistic view of the current situation, together with researchers and experts from different fields, will outline the cause-and-effect links between the various crises already affecting everyone and the impending global catastrophe.