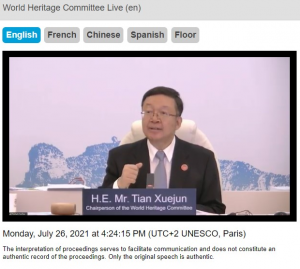 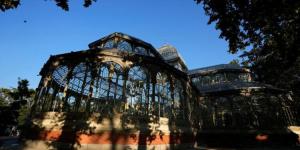 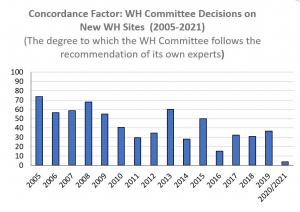 Measuring the extent to which the WH Committee agrees with its own experts. A clear trend towards complete disregard.

The coveted "World Heritage" status is awarded to sites against the recommendations of UNESCO's own experts.

OTTAWA, ONTARIO, CANADA, July 30, 2021 /EINPresswire.com/ — What if the Olympic organizers awarded gold medals to all athletes who participated, regardless of their performance? That’s what just happened at the annual World Heritage (WH) Committee meeting these past days.

The twenty-one member intergovernmental “World Heritage Committee” (the Committee) has been meeting to carry out the business of the WH Convention. Among other things, the Committee examines proposals for the inscription of new WH sites to the WH list. Like the Olympics, this is a major event – one that regularly generates more global press coverage than any other UNESCO event.

This year, 37 proposals were considered for WH inscription. These proposals are submitted by national governments and carefully evaluated against several rigorous criteria by WH Convention’s designated natural and cultural heritage experts – IUCN (International Union for the Conservation of Nature) and ICOMOS (International Council on Monuments and Sites). Evaluations include extensive site visits, consultations with stakeholders and detailed desk studies. Final recommendations are arrived at following an expert panel review of all available information.

Among all the proposals considered at this year’s meeting, IUCN and ICOMOS concluded that 20 of them met all the criteria for recognition as WH sites. Taking the advice of its experts, the WH Committee duly inscribed these onto the WH list .

For the remaining 17 proposals, the experts concluded that they either did not have any potential for being recognized as WH sites, or that they should be sent back to the drawing board due to missing information / poorly prepared justifications / absent legal protection / management or conservation plans. In each case, the experts provide clear rationale for their recommendations and a suggested way forward so that the nominations can be improved and presented again for consideration at a future WH Committee meeting.

Despite the expert advice to the contrary, the WH Committee handed out gold medals to 16 of these 17 sites – i.e. they were given full WH status, the "gold medal" of heritage sites on Earth. Inexplicably, Mongolia was the only one for which the WH Committee agreed with its experts. Mongolia's proposal, "Deer Stone Monuments and Related Sites, the Heart of Bronze Age Culture", was sent back for further improvements.

The Committee's willingness to hand out gold medals to nominations that do not meet established criteria is not a new phenomenon. Over the past 15 years, its tendency to ignore its own technical experts has become increasingly blatant. The Concordance Factor – an indicator that measures the extent to which the WH COM agrees with the recommendations of its own technical experts, shows a widening rift, going from as high as 73.5% concordance with expert recommendations in 2005, to an all time low of 3.7% concordance this week. In short, the Committee is handing out gold medals to everyone who just bothers showing up.

Summing up the most common rationale expressed repeatedly by the WH COM members:

“Even if our team of experts doesn't agree, I believe this site should be on the World Heritage list. All the problems identified by our experts can be dealt with at a later date".

Applied to the Olympics, this rationale would be equivalent to the judges in the gymnastics competition saying:

“We’re awarding gold medals to all participants because we're sure this will encourage them to practice harder and do better at future Olympic competitions”, or "This athlete has spent so much time practicing, we’d like to give them a gold medal for their effort, even if they lost”.

The WH Committee is made up of 21 official government representatives from the countries that were voted onto it for up to six years – few are heritage professionals. While Committee members come and go, one thing doesn't change: The WH Committee will regularly make decisions on nominations from countries whose representatives currently sit on the WH Committee. Any student of good governance will see that such cozy arrangements consist of a textbook case of conflict of interest. For World Heritage, such arrangements seem to lead to plenty of mutual back-scratching – studies have shown that more sites are inscribed onto the WH list from countries that sit on the Committee than otherwise.

One of the WH Convention's official strategic objectives is to strengthen the credibility of the WH List. With this year's embarrassing performance, it has become painfully clear that the main threat to the WH List's credibility lies in the WH Committee's systematic disregard of its own experts.