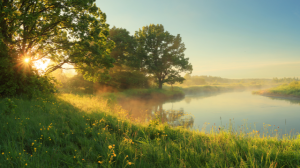 We look to the future with confidence given the 6 million tons of carbon offsets we expect to generate in the second half of the year.”
— Selwyn Duijvestijjn

Euronext-listed DutchGreen specialises in generating carbon offsets from its sustainably managed nature-based projects which are sold to businesses and consumers. the Company has a clear business model and it benefits from three sources of value accretion:
– the inherent asset value of the underlying land in which it is investing
– recurring revenue generated from its nature-based projects
– the rising price of the carbon offsets which it sells to customers

Delivery against strategic objectives – highlights for the period include:

– Carbon finance investment in Paraguay REDD+ project (Reducing Emissions from Deforestation and Forest Degradation) securing 28,572 tons of carbon offsets
– Closing of €6 million private placement
– Acquisition of a strategic 50% stake in Green Fuel Investments B.V. to drive the expansion of its groundbreaking reforestation and carbon offsetting `retail platform, Corekees
– Acquisition of a 75% controlling stake in specialist blockchain and software development tech company, Statix Artificial Intelligence B.V. to enable DutchGreen to deliver smart reforestation and ecosystem restoration projects. Closing of the transaction is expected in the second half of 2021.
– Appointment of Nigel Farage to DutchGreen’s Advisory Board. This is the first independent commercial role he has taken since stepping back from front line politics at the end of 2020
– Project with South Pole, a leading advisor and provider of global climate services, to invest in the Miro Sustainable Plantation project in northern Sierra Leone, West-Africa’s largest sustainable forestry company
– Partnership with Quadriz, the trading and carbon project arm of forestry and agro-research company Investancia Group in Paraguay, to source large-scale native forestland plots in excess of 50,000 hectares as potential land acquisition targets for DutchGreen

Financial highlights:
In the first half of 2021, the Company was focused on establishing the systems, processes and platform to enable it to effectively launch its repurposed offering to the market in the second half of the year. As such it did not generate any revenue during the first half period and incurred an EBITDA loss of €360,000.

Outlook:
The outlook for the Company is positive given its expectation of generating over 6 million tons of carbon offsets in the second half of the year from its project pipeline combined with the continued strong demand for offsets which saw the carbon price on the EU ETS (Emissions Trading System) hit an all-time high on 30 August 2021 of €61. In addition, in the next four months, DGB will launch its habitat banking exchange platform which will start to generate the Company revenue as businesses and individuals are able to efficiently purchase offsets.

Besides developing its landbank of projects in the medium to long-term which will see DGB accumulate significantly more than the 250,000 hectares of sourced land it currently has under review, the Company is also having ongoing dialogue with policy makers and other political stakeholders in the Netherlands to ensure that it remains at the forefront of industry developments.

Selwyn Duijvestijn, Chief Executive of DutchGreen, said: “DutchGreen has achieved significant progress in its transformation over the last six months and is now at the forefront of the carbon offsetting and biodiversity restoration arena. It has the platform in place to instigate real change at pace and our long-term vision is to be the world’s leading habitat bank, generating carbon credits for businesses and individuals, underpinned by sustainable on the ground projects.

“We plan to establish an exchange that enables trading in carbon offsets which will ensure transparent pricing and verification through the use of DutchGreen’s proprietary advanced technology involving drones and satellites for monitoring and evaluation. We look to the future with confidence given the 6 million tons of carbon offsets we expect to generate in the second half of the year.”

Nigel Farage, member of DutchGreen’s Advisory Board, said: “The carbontech and climate market is on the cusp of real change and it needs companies like DutchGreen that harness advanced technology to make it happen. The planet needs a properly regulated market so carbon offsets can be traded openly and fairly with a verification process and stamp that everyone can trust. Currently this is missing and there is a huge growth opportunity for those willing to change the status quo.”