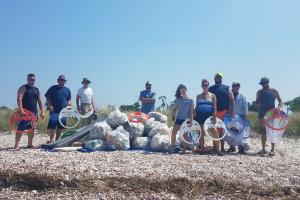 It all started in 1990 when my father had a conversation with a friend on how they both, independently, noticed workers struggling to pick up trash and debris on the highways.”
— Ashley Lionetti

For this creative Connecticut family, taking out the trash has taken on a whole new meaning. Jim Fitzpatrick, the father and his two children, Chris and Ashley, are making their mark with a speedier way to change how we clean up the planet. First came their one of a kind invention, “The Trash Bagger,” which solves problems that happen because of manual labor. Previously, collecting stray pieces of paper and debris on the ground was labor intensive, difficult and prone to error. “The Trash Bagger” is a lightweight, hand-held device designed to improve the way litter is picked up by keeping the mouth of a trash bag open as each piece of trash is grabbed; allowing users to easily deposit all types of litter more efficiently under better sanitary conditions. Productivity is therefore increased.

“It all started in 1990 when my father had a conversation with a friend on how they both, independently, noticed workers struggling to pick up trash and debris on the highways, says Ashley. It wasn’t until 1992 that my father had drawings and a prototype made.” On February 7, 2010 the family was watching the first TV episode of “Undercover Boss.” The episode, starring Larry O'Donnell, the COO of Waste Management, was given the task to pick up papers that were blowing around on a landfill site. He was given a bag and picks to aid him. Ultimately, Mr. O'Donnell was fired from his job because he was unable to hold the bag open long enough to put the windblown litter into it. Mr. O’Donnell kept asking, "Is there a trick to keep the trash from blowing out of the bag?" The family coincidentally was all watching this TV show from different locations and called each other as they remembered the invention the dad came up with 18 years prior.

The very next day, Jim, Chris and Ashley started to work again to revive their invention. With constant work and tweaking of the product along with a patent attorney, they eventually received two patents, a trademark and copyright protection. "The Trash Grabber" was then brought to market in 2011 at the American Public Works Association conference in Denver, Colorado. Originally it was called The Garbo Grabber it then was re-named as “The Trash Bagger” in 2018 when Ashley took over this company.