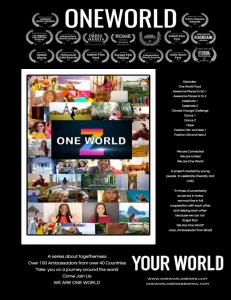 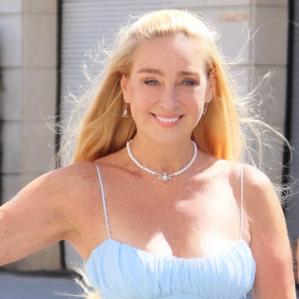 Filmmaker Diane Eskenazi produced new global tv series, One World, to inspire unity around the world. Winner of 20 short film awards, the series is out 12/1/21.

As filmmakers and content creators, I believe we have a responsibility to create positive media to uplift people, especially in these difficult times.”
— Diane Eskenazi

LOS ANGELES, CA, UNITED STATES, November 12, 2021 /EINPresswire.com/ — With coronavirus and other global challenges pulling us apart, the new TV series, One World, aims to inspire and unite the world. With the help of technology, award-winning filmmaker Diane Eskenazi used her time sheltering at home creating what has now become a multiple award-winning global tv and streaming series, called One World. To date, the series has won 20 international awards, including Best Producer and Best Mobile Phone Short at the Paris Cinema Awards and Best Smartphone Film at the Los Angeles Lift-Off Film Festival. The One World series is set to launch on various TV and streaming platforms on December 1, 2021.

Eskenazi found a unique way to bring people together by creating a new media format combining honest grassroots, smartphone-created videos by over 100 Gen Z (ages 16-25) from over 40 countries around the world, with footage from Getty Images. These One World Ambassadors share their worlds with humor and honesty filmed on their mobile phones from their own homes. Curating and editing each episode herself, Eskenazi created the One World series with the goal of inspiring "a feeling of connectivity and solidarity for young people worldwide."

According to Eskenazi, the purpose behind this ambitious project was to enable viewers to experience traveling around the world virtually learning about new cultures, without leaving their homes. Eskenazi envisioned creating a unique viewing experience that shows our differences and our similarities and encourages acceptance of diversity, inclusivity, and unity of all people no matter their race, religion or cultural backgrounds.

Eskenazi says, “I kept producing the series because, as filmmakers and content creators, I believe we have a responsibility to create positive media to uplift people, especially in these difficult times.”

To create the episodes, Eskenazi reached out on social media and through international casting websites calling for people ages 16 to 25 to talk about what they love about their native countries. They were also asked to talk about important issues such as climate change and what they can do about it, random acts of kindness they have experienced and what gives them hope for the future. With an overwhelming response of over 2,000 submissions, Eskenazi pared them down to an initial 100 One World Ambassadors representing diverse cultures.

The initial 12 episodes include food, awesome places to go, celebrations, the climate change challenge, dance, random acts of kindness, fashion and hope for the future.

Eskenazi’s vision is to create a One World council, a new Gen Z United Nations, where participants can post positive content to address real issues that affect their and future generations.

The One World series will officially launch on Amazon, Comcast in Demand, Tubi and Apple Fire TV amongst other channels on December 1st.

MORE ABOUT THE PRODUCER
Diane Eskenazi has created, produced and directed 80 award-winning films under her production company, Golden Films, that have been distributed in the U.S. and internationally by Sony, Columbia TriStar, Hallmark, Warner Vision amongst others. Eskenazi also has written, produced and published 200 songs, many of which are embodied in these films.

Most recently, Eskenazi produced One World, a series that has won 20 prestigious International Awards. Eskenazi is currently producing Get Up and Dance!