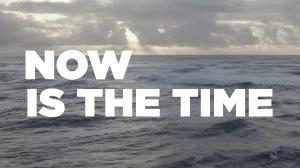 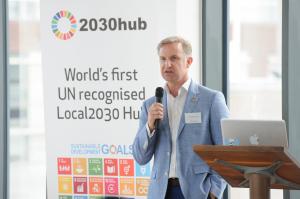 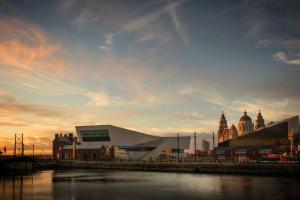 There has never been such a crucial time for radical change in human history and Liverpool as a City Region, as individuals, as businesses, as community groups and civic leadership can lead the way.”
— David Connor

Empty promises won’t save our planet. Time is running out to pull ourselves back from the brink of a climate disaster. We need urgent cooperation, bold leadership, and accountability to protect our only home. Our climate is our future. We must unite to make it right.

David has been part of the UN Foundation’s +SocialGood initiative for three years as one of 13 global ambassadors for local action aligned to the Sustainable Development Goals (SDGs). He is in prestigious company within this community as another +SocialGood Advisor, Maria Ressa recently awarded the Nobel Peace Prize for her work on journalistic freedom of expression.

2030hub was created in 2016 in response to the need to fill a place-based, apolitical and independent role connecting sustainability thought-leadership to grassroots action. Liverpool City Region has its own significant challenges around poverty, climate and health inequalities but also a unique role to play as a global citizen.

www.2030zero.com is the latest 2030hub initiative to accelerate local climate action with a specific focus on embracing net-zero demands. By connecting climate change to local needs including poverty, Covid recovery, housing and skills. 2030zero uses the SDGs as a framework to incentivise local business ownership and engagement and is supported by Peel L&P and the University of Liverpool.

David says, "I can only accept this wonderful platform for all those that have supported 2030hub across the Liverpool City Region, and beyond. There has never been such a crucial time for radical change in human history and we, as a city, as individuals, as businesses, as community groups and civic leaders need to step up and be bold beyond our bravery. These huge challenges are everybody’s responsibility, and even the smallest action matters.”

2030hub Co-Founder and net-zero expert Stephen Sykes says, “We started building 2030zero nearly two years ago after discovering that only 5 out of 50,000+ businesses had a public net-zero statement and COP26 was just over the horizon. Net-zero wasn’t a priority for anybody else back then so we corralled support and began to convene a private sector-led community and peer to peer advocacy.”

Our Climate Is Our Future